Elizabeth Barton was a Renaissance Nun whose outlandish prophecies against King Henry would eventually lead to her execution. But was she an ecstatic as the Church claimed? Or merely a pretender? 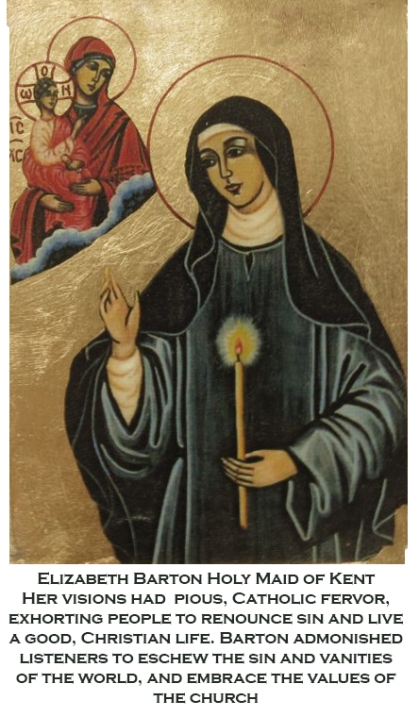 In 1525, a 19-year-old Elizabeth Barton was working as a servant girl when she became ill and started falling in and out of trances. This may have been a result of undiagnosed epilepsy but in all probability, these fits could merely have been the result of teenage angst, sexual frustration and religious mania (still experienced by many passionate young women today). Every time she emerged from one of her trances, she (speaking in rhyming prophecies) professed that she could predict the future, claiming “wondrously things done in other places.” and so she went from house cleaner to religious visionary overnight. Some of her predictions came true and some did not but her reputation spread like wildfire around the countryside and people, curios by nature, flocked to hear her revelations of whether their status of peasant would change in the near future or when their knight in shining armour would arrive.

Most of her trance-like pronouncements were more on matters of religion, such as the seven deadly sins, (always a good one), the Ten Commandments, and the nature of heaven, hell, and purgatory. Purgatory was a fate worse than death and if in doubt, read Dante’s Divine Comedy. She also spoke about the importance of the mass, pilgrimage, confession to priests, and prayer to the Virgin and the saints

When the parish priest saw that some of her prophesies were unfolding, he took it upon himself to notify William Warham, the Archbishop of Canterbury, a close confidant of Henry VII.

She correctly predicted the death of a neighbour’s child but children did not have much of a chance in those days so take that prophecy with a pinch of salt. Children in the 1500’s were subject to many diseases. From the bubonic plague, smallpox, dysentery, typhus, scarlet fever to more common illnesses such as measles, whooping cough and influenza. Death from diseases in areas containing large concentrations of people who were poorly fed, housed and sanitised was widespread. Resulting in the Infant Mortality being approximately 140 out of 1000 live births

[On a side note: This Archbishop was directly responsible for arranging the marriage between Henry VII’s firstborn son, Prince Arthur and Catherine of Aragon. That story did not end well for Arthur or for Catherine. Arthur died six months into the marriage from the “sweating sickness” and after Henry VII first considered the lovely widowed Catherine, she was found to be lacking and passed on like property to his younger son, Henry VIII

Archbishop Warham took it upon himself to investigate Elizabeth Barton as prophesising is technically at odds with the Catholic Church and measures were taken to ensure that it’s not a false prophet stirring up things in a diabolical way. Cardinal Joseph Ratzinger, who went on to become Pope Benedict XV and then promptly and mysteriously resigned in 2013, had the following to say about prophesising: “To avoid any misunderstanding, it should be clearly established who the prophet really is. The prophet is not a soothsayer. The essential element of the prophet is not the prediction of future events; the prophet is someone who tells the truth on the strength of his contact with God; the truth for today which also, naturally, sheds light on the future. It is not a question of foretelling the future in detail, but of rendering the truth of God present at this moment in time and of pointing us in the right direction.” Short and sweet.

After confirming that Elizabeth Barton’s prophecies were not contradicting Church doctrines; and that (regrettably) no exorcism was necessary (because after all, they are pretty impressive to witness and even more value for money if the victim dies and a movie can be made), it was decided that she was harmless. She entered into a Benedictine nunnery in Canterbury, St Sepulchre’s Priory without a dowry (which was a requirement for all young women choosing that path.) Here she was placed under the spiritual and erudite guidance of a controversial monk called Edward Bocking and thus a star was born

This guidance was to groom and educate her in the legends of the saints so that no grievous errors were made in her prophesies and that her religious utterances could be biblically corroborated. Bocking saw the usefulness of Barton and whether he implicitly believed her, steered her or played along with her, it did not matter because she served his religious and political purposes well. It’s clear that he did not share this bit of information with the rest of the monks who did in fact see her as a voice from G*d and were understandably awe stuck because it’s not often that you meet with a real mystic.

[On a side note: Bocking would be accused later by the government of having concocted rather than merely circulating the revelations uttered by Elizabeth. This misogynistic statement implies that Elizabeth, as a woman, could not have had the intelligence to make up these revelations]

While at the Priory, she attracted as many as 2000 pilgrims at a time who believed she was a mouthpiece for the Virgin Mary and she officially became known as the “Nun of Kent.”

Even Thomas Cranmer, Henry’s confidant and royal chaplain to the Boleyn household witnessed Elizabeth during one of her trances and he wrote a letter declaring, “A great miracle had been created by God…  Her face was wonderfully disfigured, her tongue hanging out… her eyes were in a manner plucked out and laid upon her cheeks… a voice was heard… speaking within her belly, as it had been in a cask… her lips not greatly moving…. When her belly spoke about the joys of heaven, it was in a voice… so sweetly and so heavenly that every man was ravished with the hearing thereof… When she spoke of hell… it put the hearers in great fear.”

The more rational and level-headed church leaders were only too happy to have her around as it meant money was flowing into their coffers and converts were being made. As long as her prophecies were in line with church teaching (as was confirmed by Archbishop Warham) and no devils work was at play, then they could live with her (real or imagined) divinations

Most of Barton’s predictions focused on urging people to remain within the Catholic Church, which was not a bad thing as during that time most of England were still G*d fearing Catholics who enjoyed nothing more than a good witch burning or the egging of miscreants and vagrants locked up in stocks and pillories for blasphemy

According to the monks who were diligently documenting her miracles, her cell door would curiously unlock during the night and she would be called by a voice to the chapel to converse with G*d and on other occasions she would receive letters embossed with golden characters spelling out the name “Jesus Maria” and delivered to her by angels. This collection of documented miracles was eventually handed over to the Archbishop who in turn handed it to the King although no trace of these golden embossed letters seem to have survived

It was through this documentation of her “miracles” that she came to the attention of King Henry VIII and to Thomas More; both regarded her more with interest than anything else and certainly as no threat. Yet.

Elizabeth even held a private meeting with Cardinal Thomas Wolsey, the second most powerful man in England and at one time, Henry’s close friend. During this period, Henry was still in a good mood, young, virile, handsome and currently married to Catherine of Aragon. One of his mistresses, Elizabeth Blount had given birth to a son, Henry FritzRoy, France had signed a peace treaty with England; and Cardinal Wolsey would go on to present the famed and beautiful Hampton Court Palace to Henry (in a failed exchange on his life later) and England was growing hops for the first time in 1525. This was additional cause for celebration, as finally the bland British Ale will have some flavour. So all was well with the world

However, by 1527 things had soured. Henry was actively seeking an annulment of his marriage to Catherine in order to marry Anne, the sister of another mistress, Mary Boleyn. The Pope denied the annulment considering that Henry had already received papal dispensation to marry Catherine, as she had first been his brother’s wife. Henry promptly separated the Church of England from Papal authority and appointed himself as the Supreme Head of the Church of England. The Pope retaliated and promptly and very unceremoniously excommunicated Henry

[On a side note: Even with this rift from the Catholic Church, Henry was a staunch believer in the Theological teachings of the Church.

He considered himself a man of G*d because he was chosen by G*d and therefore G*d also sanctioned all his infidelities and beheadings. He completed “The Defence of the Seven Sacraments” in 1521, which he dedicated to Pope Leo X who rewarded Henry with the title “Defender of the Faith.” In the 1530’s, the title was revoked when Henry broke all ties with the Catholic Church]

This break with the Catholic Church got everybody riled up, brother against brother, neighbour against neighbour and the town crier was on double duty calling out all the hangings and burning of heretics which escalated out of control from 1530 and only subsided in 1558 when Elizabeth I ascended the throne 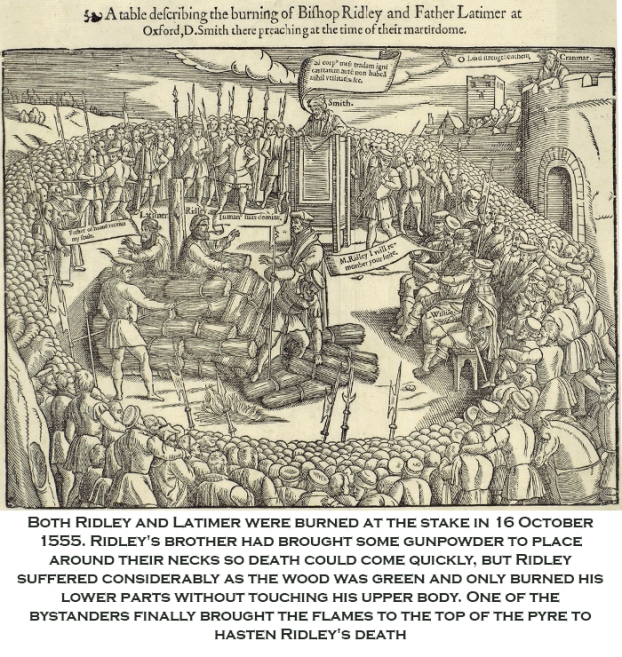