Female pirates were raiding and pillaging in huge numbers on the seven seas predominantly from the thirteen hundreds with memorable women such as Anne Bonny, Jeanne de Clisson and Jacquotte Delahaye leading the way but there was one woman who reigned above them all

Madame Shih, as she was originally known*, was born in 1775 ** and earned her living on floating brothels called Flower Boats in Canton, (Guangzhou) China

The Chinese officials tolerated this form of prostitution on the Huafang boats as long as it stayed on the Pearl River and off land and that they paid their prostitution taxes. This suited everybody as the river was 2,400 kilometers long and everybody could make money; from the water people known as the Tanka who earned their living fishing, to the Dan boat owners with their prostitutes all the way down to sailors and pirates making a call along the rivers many ports. The Pearl River is so named due to all the pearl coloured shells that lie at the bottom of the river which flows through Guangzhou. During the 1700 there were approximately 7500 floating brothels moored together which formed huge floating cities. Understandably, this became problematic when fires broke out on the wooden ships with prostitutes and punters clamouring to get ashore

A 19th century European traveller recorded the glamour of these ‘flower boats’, “These boats resemble enormous Venetian Gondolas. The greatest part of the hold is taken up by the saloon, furnished with the best style of furniture. In the middle is placed a large round marble topped table; the chairs are of Chinese ebony elaborately carved, whilst the saloon is lighted up by European swinging lamps.”

Many women took to prostitution as a way to earn a living while the female elite of China were walking around with hobbled feet, a cruel and unusual fetish bestowed upon women sometime during the 10th or 11th century and only finally outlawed in the 20th.

Madame Shih worked as a prostitute for many years before marrying the notorious pirate Zheng Yi (Cheng I) who belonged to a long line of marauding sea dogs who started out in the trade stealing for food during the famine and as they were so successful, ventured into stealing silk, gold, spice and all things nice

Madame Shih was known for her shrewd business savvy and was privy to many trade secrets gleaned from intoxicated Government Officials and other loose-lipped but wealthy clientele enjoying their post-coitis opium pipes with her before paying and going on their merry way. As she seemed to have been the favourite of Zheng Yi, she probably revealed many of these secrets to him and maybe in this way he was able to keep one step ahead of the Chinese Imperial fleet who at the time was actively pursuing him from coast to cove

Eventually Cheng Yi made a proposal to Madame Shih in 1801, which was more business in nature than of love and affection. She agreed to the “marriage” on the condition that she got 50% control of his entire enterprise. This left Zheng Yi to continue his relationship with a young fisherman, Cheung Po Tsai, who had caught his eye years earlier. In order to legitimise his relationship with the young man, Cheng Yi and his newly wedded wife adopted Cheung Po Tsai. This gave the adopted son “inheritance power” in case the old man died and the young man was even appointed Fleet Commander over a couple of Junks which he operated with an astounding amount of success

Madame Shih was tolerant of the relationship, as after all, she did not marry for love and the arrangement got her off her back and into a stellar career change, not to mention the change of scenery which previously involved mostly inspecting her room ceiling for cracks. She quickly won the respect of the men, and her husband drew upon her shrewd advice to increase his power and influence and between the three of them, they raised the fleet to 1,800 vessels and nearly 150,000 pirates who trolled up and down the coast 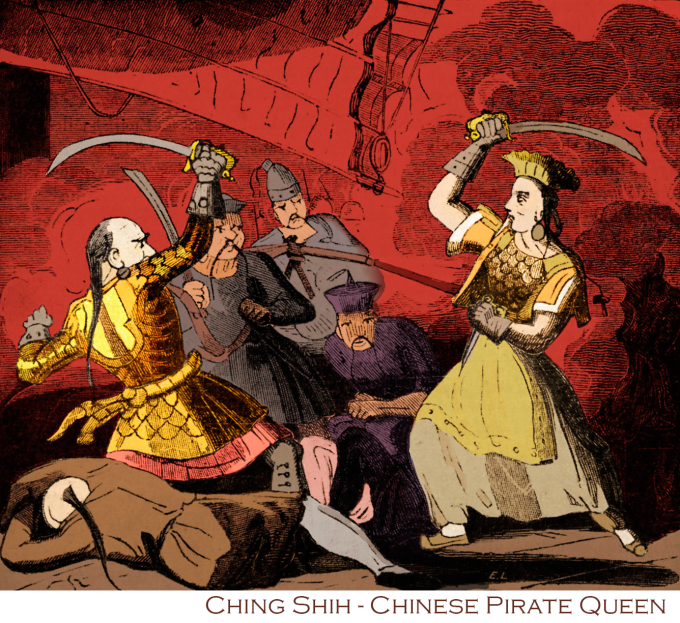 Zheng Yi’s claim to fame and glory was that he managed to unite a bunch of ragged toothed pirates sailing the South China seas and get them all to fly under the name of the Red Flag Fleet. Unless something was lost in translation, the name Red Flag Fleet is decidedly more boring than the “Jolly Roger” which first flew in 1703 and was initially known as the “Old Roger (being a nickname for the devil) before gaining the name the Jolly Roger during the Golden Age of Piracy. This flag was hoisted on the ships belonging to “Black Sam” Bellamy, Bartholomew Roberts, and Edward Teach (Thatch), the infamous Blackbeard, who is probably the most romanticised pirate ever to have sailed the seven seas

[On a side note: in three hundred years’ time, will Harlequin and Mills & Boon paperback authors be writing romance novels about the Somali Pirates off the east coast of Africa?]

** There seems to be a problem reaching a consensus on her birthdate. Many claim 1775 and the rest say 1785. 10 years is a big age difference in a woman. If she got married in 1801 with a birthdate of 1785, she would only have been 16. Still young, still sexy, probably highly desirable for a pirate but no way would she have been equipped to strategically operate a fleet of ships, therefore I am sticking with 1775

9 thoughts on “Ching Shih – From Prostitute to Pirate”