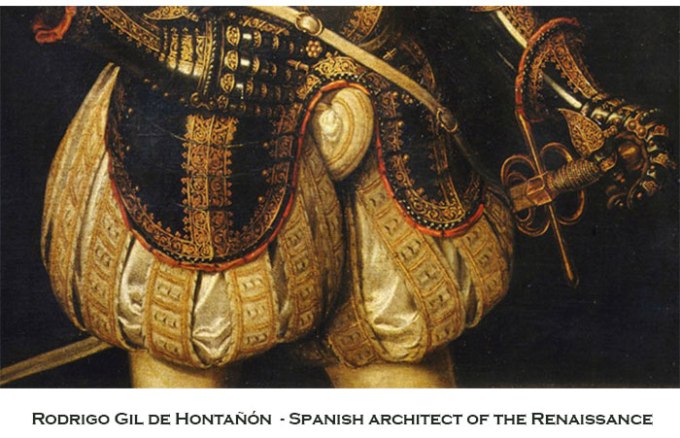 Codpieces briefly reared their head during the renaissance period and reached their peak in 1550’s. Every man who donned a pair of leggings wore a codpiece, regardless of age, sexual orientation or religious persuasion. For some reason, fashionistas of the 1500’s thought that a man running around in a pair of leggings with a short tunic fastened at the waist and a protruding codpiece looked sexy. Men, especially in the upper classes, were extremely concerned with clothing and footwear; and had a fondness for finery which included silks and scarlets. This is clearly demonstrated during the 15th, 16th and 17th century with many young men being prone to reducing their family fortunes with their predilection for fashionable frippery, including ornate bulging codpieces

Codpieces were not an invention of the renaissance. Simple codpieces have been found on figures excavated at Knossos on the Minoan island of Crete. 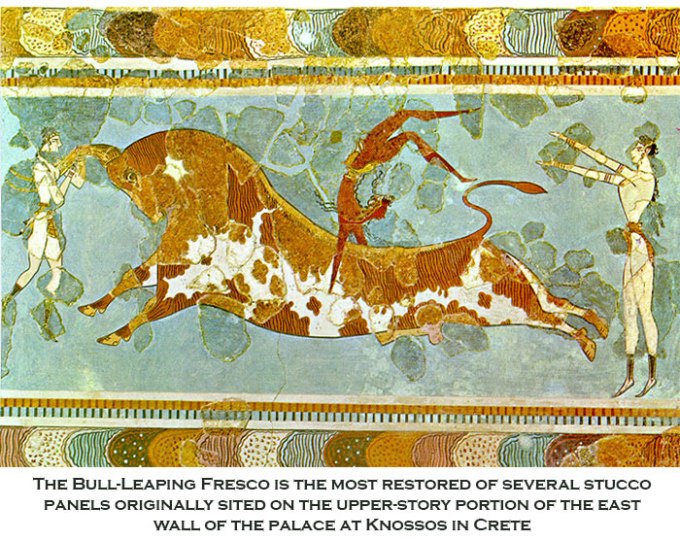 Wearing codpieces was probably a wise choice for the athletes “Leaping the Bulls” provided it was sufficiently padded and attached to the wearer. Leaping the Bulls was a spectator event which had nimble youths (of both sexes) somersaulting and vaulting over charging bulls. Grabbing the bull by the horns, so to speak.

[On a side note: Leaping the Bulls has been adopted by Spain (who are best known for the killing their bulls) and goes by the name of Recortes. Not to be confused with matadors, toreadors and picadors. Matadors stay on the ground and a picador is one of a pair of horsemen in a bullfight who jabs the bull with lances in the shoulder muscles, weakening the animal before the kill. Where’s PETA when you need them?]

The codpiece was an additional piece of material attached to the front of men’s attire to make them fit for going out in public. Initially men who wore legging were somewhat exposed in the front.

Leggings were not similar to (the con of the 21st century of one-size-fits-all) pantyhose women are still forced into wearing when going out for a formal event. Any woman and respectable drag queen that has spent 10 minutes slithering and sliding into a pair of pantyhose can attest to the emotional stress and trauma incurred to ensure that the seam is in place and that no hangnail catches any part of the insanely delicate fabric. Worst is to discover, once dressed and cooled down (from standing in front of a fan for 30 minutes afterwards) is that the whole process has to be repeated again as a ladder has sprung up in the back and yes, everybody will notice

[On a side note: A small word of caution to all women and young girls of confirmation age, if you are slightly overweight, never, ever try to run while wearing pantyhose unless you want the inside of your thighs to catch fire]

Men’s leggings during the Renaissance period were in fact two separate tubular items (initially constructed from animal skins) which were pulled individually up each leg and fastened around the waist, usually with buttons or string to keep them in place

Buttons during this period were small silver or golden bases filled with enamel, pearls, diamonds or rubies. The peasants (pretty much the rest of us) wore buttons crafted from bone, wood, tin, copper, bronze, leather. Even if zips were invented prior to 16th century, it would quickly be revealed why men using zips in those delicate regions without underpants could be fatal.

[On a side note: The first zipper like prototype was only invented in 1851 and eloquently named the “Automatic, Continuous Clothing Closure.”]

Imagine the scene. A young slightly hungover Renaissance Lothario using the privy only to be startled by hearing his number being called up next for the joust, which in a moment of revelry the night before agreed to be signed up for. Rushing to be on time as it does not do to make the King wait, he pulls up the zip. Trust me, he is not going to make the joust and most likely somebody is going to have to call the young man’s mother to assist him out of his current predicament

The problem with these leggings being two separate pieces, (pretty much like stockings although made from a non-stretch fabric), was that they made no allowance for covering the front bits which for the most part suited guys pretty well. Great for aeration and going to the bathroom, either for a wiz or a chance encounter, (ask the kilt wearing Scots). Although some Highlanders claim that no underpants were worn so that when charging into battle, they could quickly remove the cloth from around their waist and in doing so would intimidate the enemy either into surrendering or fleeing. In all honesty, there is something to be said for that. One hairy man is enough. Ten or men hollering, charging, naked, bristly men is enough to put the fear of g*d into any man

As respectable knee length tunics became shorter to better accommodate horse riding and the killing of opponents, men inadvertently started exposing themselves to all and Sundry particularly when mounting their trusty steeds or changing a lightbulb. In this case, relighting an extinguished candle on the candelabra, gently swaying over the dining room table

Naturally, there were moralists and clergy (being exempt from all fashion trends) who condemned the exposing of this flesh stating that it was a “feast for the sodomites” and in fact, codpieces even got an honourable mention in the Canterbury Tales;

“Alas! some in their tight pants show their protruding shape, their horrible swollen members, till you’d think they had a hernia. And their buttocks look like the hind end of a she-ape at full moon. Moreover, the wretched swollen members that they show through new-fangled clothing”

And so by 1463, it became compulsory for men to cover their privates, back and front.

The solution to this problem was to fasten an additional layered piece of material, usually linen (before moving onto velvet and silk), around the front bits and before anybody could scream Alexander Macqueen, the codpiece not only was reborn but became a fashion statement, sweeping throughout Europe, padded, decorated with metallic thread, topped with bows, bejewelled and lovingly embroidered. Problem with this was that this item, predominately use to cover the privates, was worn outside the clothing

The codpiece rapidly became a flashy piece of fashion accessory worn with pride over the piece of anatomy of which no one spoke. Men were going out of their way to accentuate their packages to bizarre proportions. Many courtiers and courtesans spent time behind their fans, tittering as well-stocked gentlemen walked by, their codpieces stuffed with straw, material or even horsehair and later reinforced with leather or bone. Furthermore, the roomy space inside them protected the genitals from friction and the occasional bump from all the things hanging from a man’s belt, including swords, daggers, and fanny packs but not from getting a swift kick in the goonies by an indignant chamber maid or stable boy. Then there was not enough padding to prevent the wearer from going down clutching and groaning

These codpieces did not morph into anything practical for the first couple of decades. Whereas today’s equivalent, the sports (athletic) cup has the power in its little plastic cup to save the wearer from a gazillion miles-an-hour cricket ball. No. Codpieces of old was merely to hide and then to accentuate the man’s package. This is probably why head-bangers and metal-heads wear them on stage, much to groupie’s disappointment after-the-fact but by then, the band has moved onto the next big gig

The only other time, besides at a leather B&D feast that you are likely to see a codpiece now is if you are dragged off to see something on stage written by Shakespeare, who by the way, seems to have fixated somewhat on this item of clothing

“sometime like the shaven Hercules in the smirch’d worm-eaten tapestry, where his codpiece seems as massy as his club?” – Much Ado About Nothing: Act 3, Scene 3

“Why, what a ruthless thing is this in him, for the rebellion of a codpiece to take away the life of a man!” – Measure for Measure