After the tragic beheading of Anne and George, Jane moved to the countryside but was soon recalled back to the Kings court and made Lady of the Bedchamber to Jane Seymour who had become the third wife of King Henry.

Unfortunately, Jane Seymour died a couple of days after giving birth to a son, named Edward.  Even though Henry was pretty upset, his minions wasted no time in trying to obtain him another wife, but as Henrys reputation preceded him into Europe, very few bachelorettes were keen. One quick witted Duchess, Christina of Denmark, even declared that she would if she “were in possession of two heads.” The Duchess only got out of the proposed marriage on a technicality of being the great-niece of Henry’s first wife, Catharine of Aragon

Two years later, Thomas Cromwell secured Anne of Cleves, who was unread, boring, dull and conservative; not to mention that communication between them limited as she did not speak much English and Henry did not understand German. And then there was the matter of her looks which Henry compared to “a Flanders mare” which apart from being rather mean proved how superficial the King was. By this stage the King was particularly fat and unattractive himself. After the night of the consummation, Cromwell asked him “How liked you the Queen?” and he replied “I liked her before not well, but now I like her much worse” and it was all downhill from then

Henry wanted a quick divorce from his fourth wife, Anne of Cleves because he found her unbecoming, particularly in bed, so whom did he call upon?

As Jane Boleyn was Lady of the Bedchamber and privy to such private matters, she could give testimony that the marriage between the king and Anne was not consummated and under Tudor law, this was grounds for another divorce. In fact it was a mean spirited statement that Jane had originally made to Anne a while ago, accusing her of “still being a maid” due to her inability to conceive that set everything in motion and so in 1540 the marriage between Anne and Henry was declared null and void

This divorce would then pave the way for 51 year old Henry to marry Catherine Howard who was only 16 or 17 at the time, and Lady-in-Waiting to Anne of Cleves.

Due to the fact that the divorce from Anne was pretty amicable and swift, Henry allowed Anne to remain in England, with a monthly stipend paid from his coffers. She was even a regular guest at court proving that she could not have been that disagreeable, as well as the fact that Henry and the other courtiers referred to her as “the King’s Beloved Sister”. Anne’s only vice was that she took a liking to drink and gambling but at least she kept her head

[On a side note: Thomas Cromwell was condemned to death without trial and privately beheaded on Tower Hill on 28 July 1540, the day of the King’s marriage to Catherine Howard. After the killing, his head was set on a spike on London Bridge. The true reason behind his execution remains a mystery, although it was said it was due to his finding the King such an ugly wife as Anne of Cleves.  But officially he was charged with selling export licenses illegally, granting passports and commissions without royal knowledge, freeing people suspected of treason and misusing royal power but a couple of months later, Henry VIII was soon despairing at the loss of his ‘most faithful servant’] 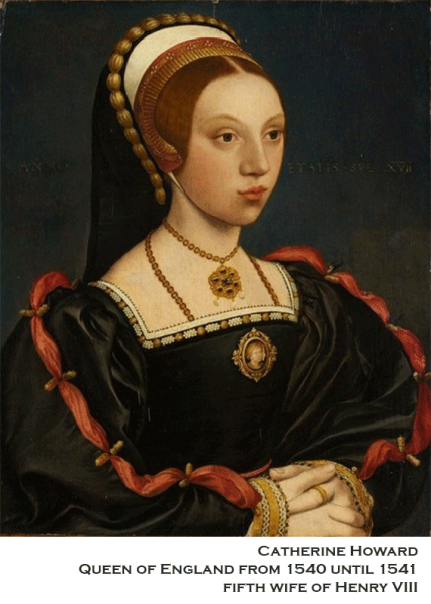 20 days after Henrys annulment to Anne, he married Catherine Howard, his fifth wife,which lasted a mere 16 months. This in itself is not surprising as long before Catherine came to court she was known to have engaged in sexual relationships with various men and was known for being a bit of a tart. Henry was prepared to overlook her past indiscretions as she was his “rose without a thorn” and from the time she came to court he started bestowing gifts upon her.  But as is the case with all love struck fools, he did not for one minute think that anything untoward would happen between his young wife and any of his courtiers, even though rumours were circulating court that he was not much of a stud-muffin in the boudoir which might lead her to look elsewhere. This rumour was allegedly started by Anne Boleyn in a conversation with Jane Boleyn years back and probably confirmed by many other women. His rapid weight gain and festering leg ulcers from a jousting accident could not have helped matters either

And this brings Jane Boleyn once again back into the story.

She was also Lady of the Bedchamber to the young Catherine and also privy to all her secrets but it did not stop there. Due to flagrant flaunting of court rules brought on by arrogance (or spite) Jane became the go-between for Catherine and Thomas Culpeper, a courtier and close friend of Henry’s, arranging for meetings and secret trysts with Catherine every time Henry was out of town. Rumour had it that she instigated or at least encouraged Catherine’s affair with Culpeper for reasons unknown. Catherine would address letters to Culpeper stating that he was to come to her when Jane Boleyn was there to keep a lookout and it was these letters that would have serious implications later on

Jane knew what the ramifications were if it were discovered that the Kings consort was sleeping around as she had witnessed first-hand what had happened to her husband and his sister yet she never hesitated. Why? Because she was definitely a lover scorned

This would entirely give credence to the earlier statement that she was the “Mistress Parker”. Why else would she be so hell bent on seeing the Kings wives vilified and what a better way to get back at the King for jilting her all those years back? It would also explain why after the beheading of Anne Boleyn, she was allowed back into court regardless of the rumours, and serve under three more wives?

When the King got wind of the affair, an investigation was started and all sorts of truths and half-truths came out. Some maids claiming that they saw Catherine with their own eyes “fornicating” with Culpeper and others stating that they saw the “look of love in her eyes” while gazing at Culpeper. Others claimed that Jane Boleyn would “lock all three of them in the bedchamber from the inside for hours on end and would not let anybody enter”.

When Catherine was accused of the affair, which amounted to treason against the King, Jane Boleyn first denied knowledge of it but then claimed that Culpeper so harassed and pursued Catherine that both of them just gave in to his demands and let him into the bedchamber while Jane was required to stand guard at the door in case the King arrived back. Catherine turned around stating that Jane was the agent provocateur in the whole affair and letters which were written between the two lovers surfaced and Jane was mentioned as a trusted ally. That was enough to damn her as it proved without a doubt her responsibility in the affair and she was charged, tried and found guilty.

Culpeper was executed on 10 December 1541 and his head was put on display on London Bridge along with all the other treasonists. So much for romantic walks along the bridge at sunset

Before Catherine was executed, she said a prayer for Henry before having her head removed by a single blow from the executioners axe

Jane also made a prayer for the King and stated that she had falsely testified against her husband George and Anne, saying “God has permitted me to suffer this shameful doom as punishment for having contributed to my husband’s death. I falsely accused him of loving in an incestuous manner, his sister, Queen Anne Boleyn. For this I deserve to die.” before placing her head on the block, still warm from Catherine’s blood