But where was Jane Boleyn during all this?

Stuck in a loveless, childless marriage to the intelligent, good looking George, who was a palace courtier during the early reign of King Henry VIII and a firm favourite of the King due to his quick wit and intelligence. George Boleyn was regularly mentioned in the palace account books as being the Kings partner in bowls, tennis, cards and archery while Jane was employed as a Lady in Waiting to various queens and consorts 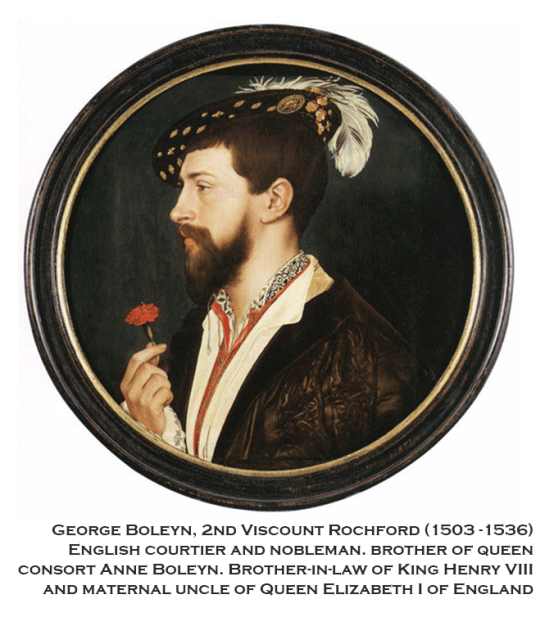 George, who would live to regret it, was a key player in assisting the King getting a divorce from Catherine of Aragon so that he could marry Anne

[On a side note: The public and messy divorce from Catherine would set into motion a whole series of unfortunate events, most importantly the split from the Catholic Church which would lead to a fleet of 130 ships known as the Spanish Armada attempting to invade England a couple of decades later to overthrow the heretical Queen Elizabeth I and reinstate Catholicism]

George Boleyn was educated at Oxford (although no records exist) and he inherited his father’s talent for languages, being fluent in Latin and French with a smattering of Italian. This resulted in him being sent (at an extremely young age) as Ambassador to France where he enjoyed a close relationship with the French King, Francis I (although not as close as his sister Mary). George even convinced the French King to write a letter to the Pope on behalf of Henry to approve the annulment of the Kings marriage to Catherine. The letter writing came to naught as the Pope had enough of the Tudors and excommunicated Henry from the Catholic Church in 1533 without further ado and it was George’s duty to inform the King of the Pope’s actions. That conversation could not have gone well. It’s very feasible that George feared for the safety of his head for a while but he lived to tell the tale as a month later he carried the canopy over his royal niece, the Princess Elizabeth at her christening and two years later was sent to negotiate the future marriage between the baby Elizabeth and the King of France’s third son

George was also an accomplished poet and translator; and developed a strong interest in political theory and religion, even translating two religious French texts, the Pistellis and Gospelles and the other The Ecclesiaste, into English and dedicating them to Anne with a tribute which would come back to haunt him later; “To the right honourable lady, …, her most loving and friendly brother sendeth greetings. Our friendly dealings, with so divers and sundry benefits, besides the perpetual bond of blood, have so often bound me, Madam, inwardly to love you, that in every of them I must perforce become your debtor for want of power, but nothing of my good will”

Regardless of his religious and political zeal, George was equally known for his dalliances with other women. His behaviour was so notorious that George Cavendish, a gentleman servant to Cardinal Wolsey, mockingly castigated George for his womanising ways in a poem entitled Metrical Visions;

I forced widows, maidens I did deflower.All was one to me, I spared none at all, my appetite was all women to devour. My study was both day and hour.

However, the same writer does go on to mention George’s good looks, charm and intelligence but this public ribaldry regarding her husband’s infidelities and his indifference towards her feelings understandably infuriated Jane and assuming that Jane Boleyn and Mistress Parker were one and the same, then she was also one of Henry’s jilted lovers, first in favour of Mary and then of Anne and watching her husband, another Boleyn, committing one indiscretion after the other in full view of the court was probably the final straw

So how could she hurt the man and his family that humiliated her? She would destroy him and those that he loved

Circumstance played into her hand, when in 1536, Anne (who was at that stage already married to the King in a shotgun wedding three years earlier) miscarried a male heir. Whether it was just one of those sad events or if it was due to Anne discovering her husband’s shenanigans with her own Maid of Honour, Jane Seymour, is unclear. And the fact that Henry started accusing Anne of seducing him into marriage with the use of witchcraft was not helping much either. Not only had Anne lost a male child resulting in her tenure as consort pretty precarious but at this stage Henry discovered he was actually in love with the Maid of Honour and the only way to marry her was to get rid of his second wife, Anne 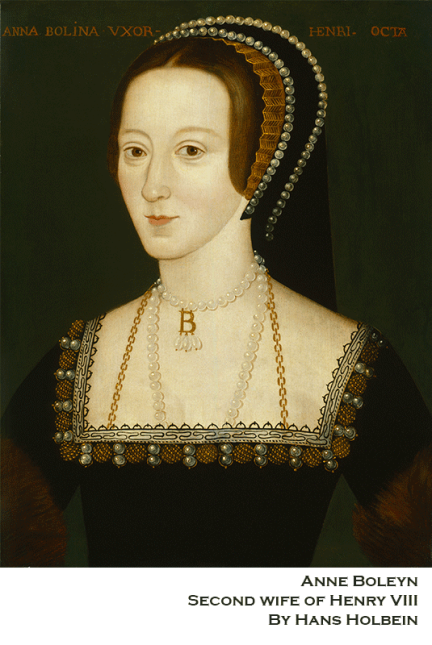 Henry turned to Thomas Cromwell who welcomed the task of getting rid of Anne. He had a run in with her a while back regarding where the proceeds from the dissolution of the monasteries should go once the new religion was up and running. Cromwell wanted it to go into the Kings coffers but Anne was insistent that the money would be better spent on educational and charitable causes. This was a rather public chastisement from Anne and she made a mortal enemy out of Cromwell. Sad irony is that Cromwell personally manipulated and changed the Law so that Henry could marry Anne in the first place 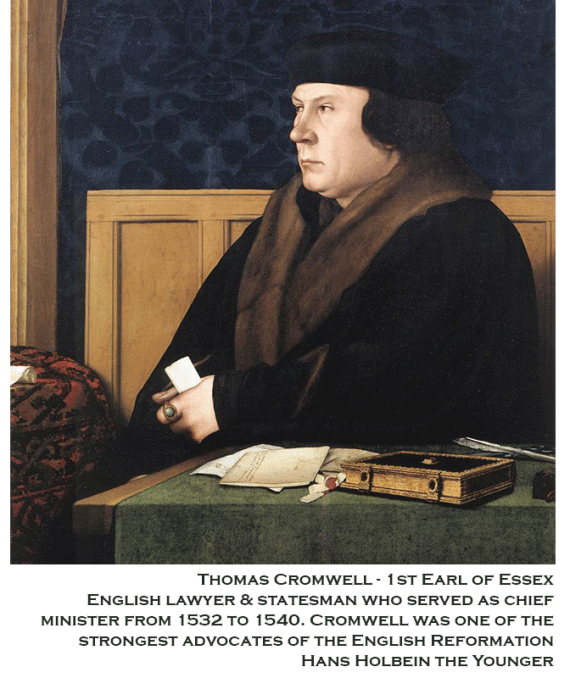 Henry and Cromwell decided that the only way to get rid of Anne legally would be to charge her with adultery in line with the rumours which were being spread by her sister in law, Jane

So who was she committing adultery with?

Why, said Jane Boleyn, with George, of course!

What? With George? Her own brother?

And Janes proof of all this?

The close bond George shared with Anne which Jane said was unnatural and she also referred back to the religious texts that George had translated and inscribed for Anne. Apparently the statement “her most loving and friendly brother sendeth greetings. …, besides the perpetual bond of blood, have so often bound me, Madam, inwardly to love you, that in every of them I must perforce become your debtor for want of power, but nothing of my good will” was a sign of their incestuous relationship

Did Jane for one minute think that her accusation would result in mere imprisonment or worse banishment? No, she knew very well that her damning evidence would lead to the death of Anne and to the death of her husband. She would be rid of Anne of whom she was jealous as she felt that her husband was spending far too much time with her, and she would be rid of her philandering husband who was sleeping around. Maybe it was also a jeer at the King. Making him sacrifice Anne whom he did once love, in revenge for the King leaving her for the Boleyn girls years back when she was known as the Mistress Parker. Many birds with one stone so to speak

Another tiny detail that is often times overlooked is that although George and Anne were both vocal advocates of the new religion, Jane remained a firm Catholic. Perhaps she also blamed the Boleyns for being instrumental in Henry and most of England leaving the Catholic Church and there was the matter of the public executions of a couple of Monks, as well as Bishop Fisher and Sir Thomas More, admired and respected Catholics. This got the Catholics riled up against the “Concubine Anne” because if it was not for her, England would still be eating fish on Friday and getting absolution on Sunday for not

Bishop Fisher had become Catherine of Aragon’s chief supporter and most trusted counsellor during the time Henry was trying to divorce her and Sir More refused to attend the coronation of Anne Boleyn as the Queen of England, that although not considered treason was seen as a snub. Later both men refused to acknowledge Henry as Supreme Head of the Church of England, and in turn were convicted of treason and sentenced to death. Many spectators with nothing better to do came to view the executions and among them was George Boleyn 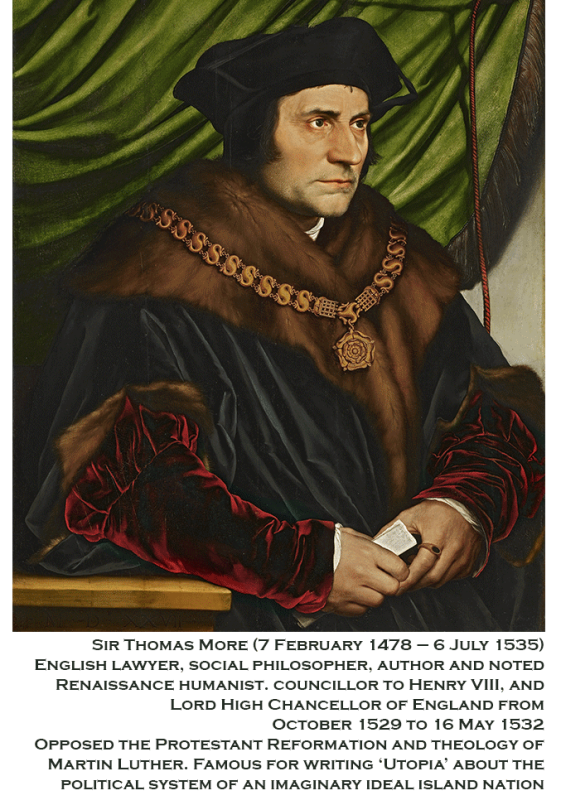 To make the trumped up charges against Anne stick, the King and Thomas Cromwell threw a couple more names into the ring and Anne was finally charged with adultery with five men, including incest with her brother (even though palace records show that she was with Henry at Windsor Castle on the day of the alleged affair). George was charged with incest and plotting with Anne to kill the King even though no witnesses were produced against him

[On a side note: The Imperial Court Ambassador and steadfast Catholic, Eustace Chapuys, (who also fought to prevent Henry from divorcing Catherine of Aragon and who would be a staunch supporter of Henrys Catholic daughter Mary), wrote to Charles V (the Holy Roman Emperor at the time) that Cromwell “has been authorised and commissioned by the king to prosecute and bring to an end the mistress’s trial, to do which he had taken considerable trouble… He set himself to devise and conspire the said affair.” The outcome of the trial must also have been a hard blow for Eustace Chapuys as he had spent many hours in George Boleyn’s company where they debated the merits and shortcomings of their respective religions. Clearly both men were mature about the whole issue as no blood was ever spilled]

George was also accused of being the father of Anne’s miscarried child and superstition of the time believed that deformed and miscarried children were a sign of God’s displeasure and this fitted perfectly into the charge of incest. Furthermore, this casting of blame suited Henry as he did not want the people to think that it was he being punished by God for divorcing Catherine of Aragon or that his manhood was in question

Jane Boleyn then had her 15 minutes of fame by giving sworn testimony in court accusing Anne and George of incest. The final twist in the plot is that Anne’s own father, Thomas Boleyn (one of the King’s leading diplomats) was on jury duty that day as he failed to come up with a more pressing appointment and by finding his own son guilty of the charges despite any evidence, in effect condemned his own daughter to her fate as well. There is no record of him pleading for their lives be spared. Nothing. He sort of fell out of favour with the King for a while but bounced right back a couple of years later. Their sister Mary, the Kings old mistress with at least one rightful heir in tow, was nowhere to be seen during the entire trial and execution. Clearly this was either a case of an emotionally vacant family or serious self-preservation

George Boleyn and the four other accused were beheaded on Tower Hill on the morning of 17 May 1536, with George’s last words being “beware, trust not in the vanity of the world or the flatterys of the court, or the favour and treacheries of fortune”

One thought on “Jane Boleyn – Condemner of Queens – Part 2”